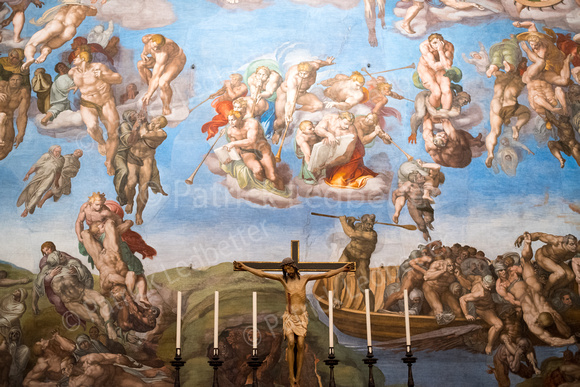 The Last Judgment by Michelangelo

The Last Judgment is a fresco by the Italian Renaissance master Michelangelo executed on the altar wall of the Sistine Chapel in Vatican City. It is a depiction of the Second Coming of Christ and the final and eternal judgment by God of all humanity. The souls of humans rise and descend to their fates, as judged by Christ surrounded by prominent saints including Saints Catherine of Alexandria, Peter, Lawrence, Bartholomew, Paul, Sebastian, John the Baptist, and others.

The work took four years to complete and was done between 1536 and 1541 (preparation of the altar wall began in 1535.) Michelangelo began working on it twenty five years after having finished the Sistine Chapel ceiling.

An older and more thoughtful Michelangelo originally accepted the commission for this important painting from Pope Clement VII. The original subject of the mural was the resurrection, but with the Pope's death, his successor, Pope Paul III, felt the Last Judgment was a more fitting subject for 1530s Rome. While traditional medieval last judgments showed figures dressed according to their social positions, Michelangelo created a new standard. His groundbreaking concept of the event shows figures equalized in their nudity, stripped bare of rank. The artist portrayed the separation of the blessed and the damned by showing the saved ascending on the left and the damned descending on the right. The fresco is more monochromatic than the ceiling frescoes and is dominated by the tones of flesh and sky. The cleaning and restoration of the fresco, however, revealed a greater chromatic range than previously apparent. Orange, green, yellow, and blue are scattered throughout, animating and unifying the complex scene.
2016 Patrick Ledbetter
Powered by ZENFOLIO User Agreement
Cancel
Continue